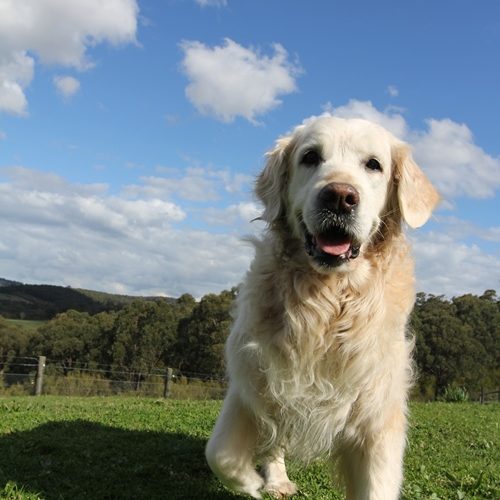 Goldilocks arrived with us when her owner passed away. She was 13 years old, partially deaf and blind but had plenty of sass left in her! Her owner sadly passed away and left 6 poodles, a himalayan cat, and Goldilocks. We homed the 6 poodles and the cat but felt that it would be hard to find her a home so she became a resident at Harmony Reins.

Goldilocks knew how to tell time and was a great alarm clock. When it was a minute before dinner time, she would come and stand in front of you and bark at you until you got up to feed her. This happened like clockwork every single night. Bad luck if we were on the phone or were doing something else, her clock told her it was the right time!

Goldilocks was with us for another 2 years and at 15 she went completely blind and deaf and it was time. We said goodbye in early 2016. Goldilocks was a very special dog and we are very grateful that we were entrusted with her care in the last years of her life. 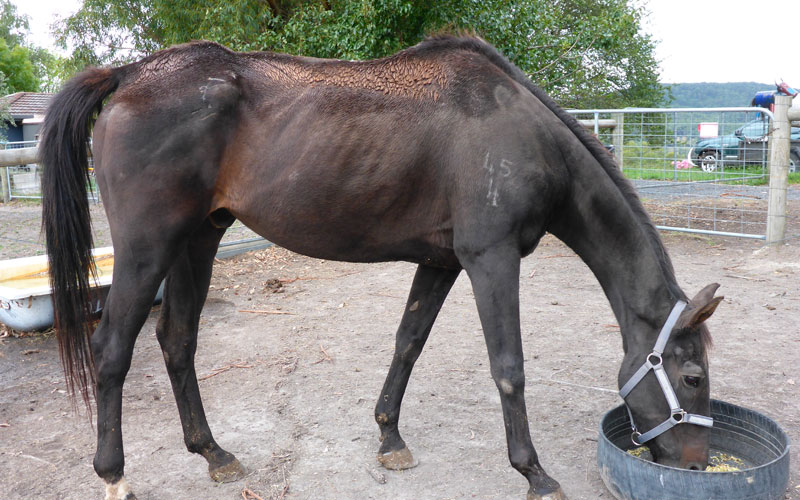 In March 2015, we were called about a horse that had turned up during the middle of a sale and was one of the last horses sold. He was in terrible condition needed another chance. He was actually purchased at the sales by the meat man who will sell before they reach his premises. We were appreciative of the opportunity to help him and Catherine purchased him to be rehabilitated at Harmony Reins.

We decided to name him Monty. Monty is a Thoroughbred who is believed to be 21 years of age (based on his brands CR 45 0ver 4). His condition on arrival was appalling. His coat was covered in rain scald and not an ounce of fat anywhere. He was immediately wormed, rugged and fed. Over the next few weeks he was fed 4 small feeds a day plus access to hay. His condition slowly improved and his eyes became brighter, he held his head higher and the dullness was gone. His teeth were sharp and he was unable to fully digest his food so our vet attended to his teeth, vaccinated him and gave him the once over. Monty was in good health other than not having enough food.

We have since found out that he racing name was Man of Glory. He was bred in New Zealand and his sire was Isle of Man and dam was Thank God. His raced mostly in NZ and in his career he had 54 starts for 2 wins, 1 second and 4 thirds with $11,951 in prize money. Apparently, steward’s classed him as “unruly”.

After many months, Monty’s weight has returned to a healthy level. He is down to 2 feeds a day with access to hay. He has 5 friends in his paddock and is top of the pops! He eats first and is in charge, always. We can understand the ‘unruly’ comment when it comes to other horses in the paddock, he is absolutely the boss! But towards humans, he has a softness that makes him very endearing and he is easy to rug and do anything with. He does have his quirks which include not swallowing the paste when he is wormed. He just leaves the paste in his mouth and we have no idea how long it stays there for!

Update – April 2018 – sadly we had to say goodbye to Monty as he became quite frail and was not coping with the long hot summer we had. We miss you Mont-y-sawrus! 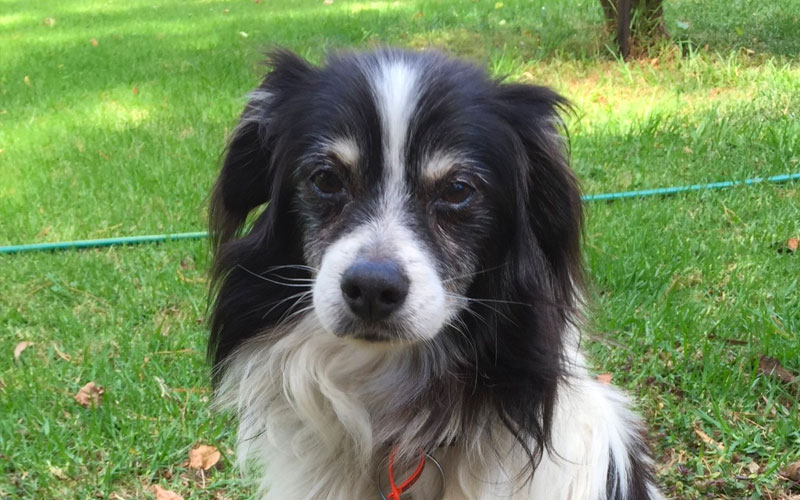 Charlie is a sprightly 10 year old Paillion X who is looking for a new home.

Sadly, Charlie’s elderly owner passed away. Charlie’s owners daughter, Gail took over caring for him. Charlie is living in a great environment. He has a big yard, doggy company and has everything that he needs yet there is something missing.

Charlie is lonely. He is escaping during the day when Gail and her husband are away at work. They constantly worry about him and have tried everything to keep him in but think he will be happier if he can find a home when he has more constant contact and someone with a secure yard.

Charlie is a friendly dog that gets on well with other dogs and cats. He travels well in the car and loves to go for an adventure. He has a great appetite and will eat almost everything. Charlie also loves a walk but will happily be a couch potato if there is someone home with him. 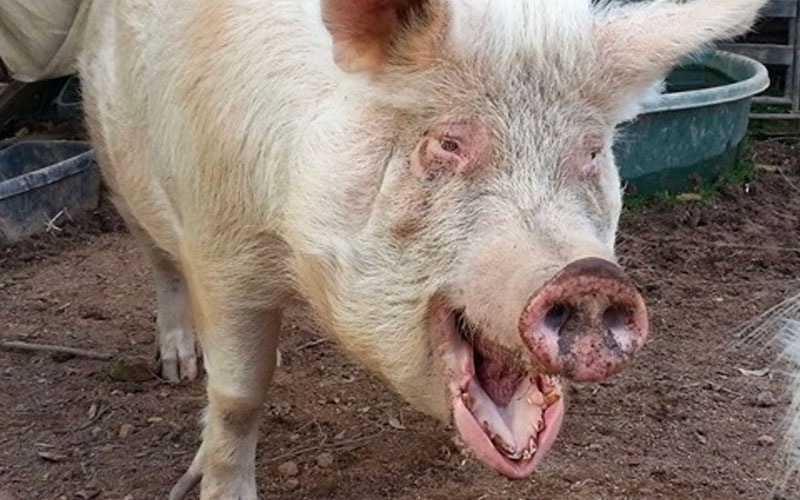 Clover is a 4 year old Large White piggy who needs to find a new home as her owners are moving off acreage. Bella is a 3 year old desexed female mini pig. She is looking for a new home as her owners are moving off acreage into a smaller property and there is not room for her or her bestie, Clover. Shanna Lea is a 20yo oversize miniature pony. Her owners lived on a large property but sold it and could not take her to live with them in the suburbs. 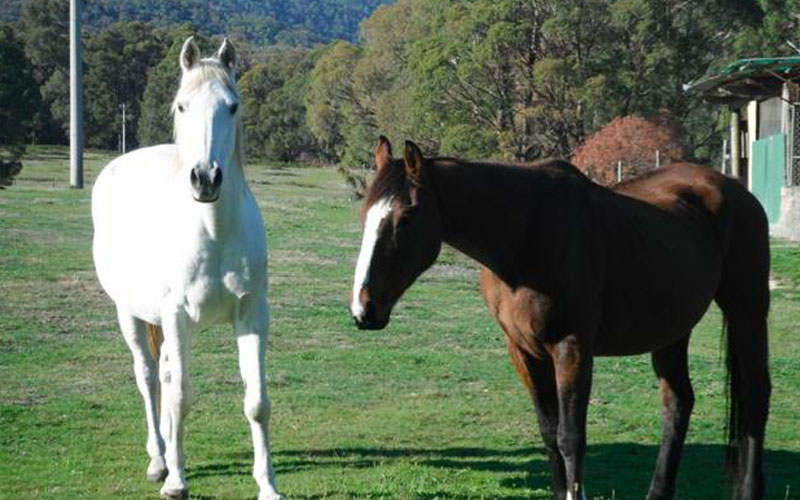 Phantom and Regal are two mates looking for a new home together. Sadly, their owner passed away a few months ago and there are no other family members that are willing to care for them. This little lady was approximately 14 years old when she first came to Harmony Reins in March 2010. Sadly she had ended up in a local shelter, discarded due to her advancing years. As expected, now in her golden years Maya does have a few health concerns. She suffers from arthritis, particularly in her back legs and is loosing her hearing. Maya makes regular visits to our vet and receives Cartrophen injections to help keep her joints as comfortable as possible. She takes great joy in hanging out on the farm, supervising everyone and everything! Maya is a much-loved family member and she will remain at Harmony Reins for the rest of her days.

UPDATE – It is with deep sadness we must inform you that Maya passed away on Sunday 13th November. Maya was a very special member of the Harmony Reins Family and will be greatly missed. 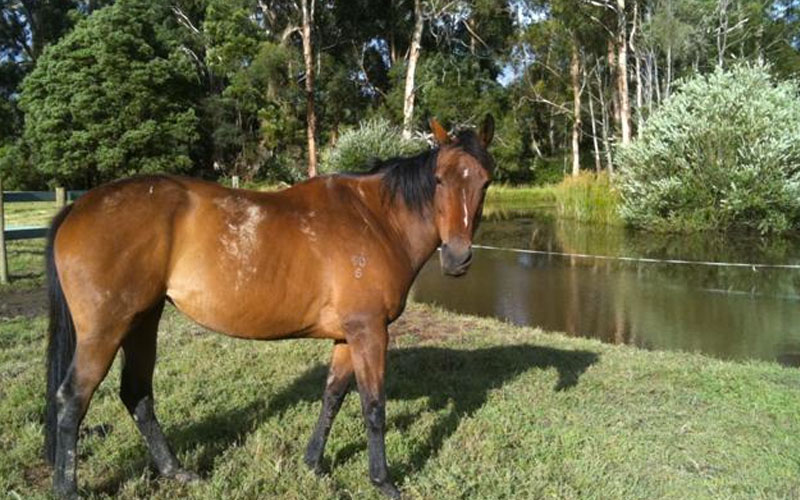 Bella is looking for a new home. She is a 14 year old brown TB mare who is around 16.2hh. She has a lovely personality and thinks of herself as a big puppy, following you around the paddock and dozing off with her head in your arms. Bella is also quite the chatterbox, always giving you an answer when you talk to her. Bella is a companion horse and is unable to be ridden due to an old injury.

Bella’s owner has had her for the last 6 years as a companion horse. Up until last year Bella was fine in her paddock. And then came the rain….. She really struggled over the winter with seedy toe and abscesses. She is kept in a paddock that is reclaimed wetlands at the bottom of a hill catching all the rain. Last year’s rain really had an impact on Bella’s overall health. Bella’s owner has her best interests at heart. She thinks the best outcome for Bella would be to find her a new home where she can be moved to higher ground where the paddocks are not so muddy and wet. If you think you could provide Bella with a long term home please contact us.

UPDATE – 12/6/11 – It is with great sadness that we must withdraw Bella from our listings. Over the weekend Bella was injured in a paddock accident, and on veterinary advice had to be put to sleep. Our thoughts are with Bella’s owner, Haylee, as we know she cared very deeply for her horse and was trying very hard to find her a better situation. Timmy’s owner died and he was re-homed with the owner’s adult children (who had children of their own). Timmy found it really hard to fit into the hustle and bustle of an active family and was very unhappy. The new owners were not really cat people and Timmy struck out at one of the kids. He was then surrendered where he spent the next few years in a cage looking for a new home. It was said he was no good with kids and other animals.

END_OF_DOCUMENT_TOKEN_TO_BE_REPLACED

Harmony Reins is now a registered Australian charity. If you'd like to support the work we do, you can send us a donation via PayPal.